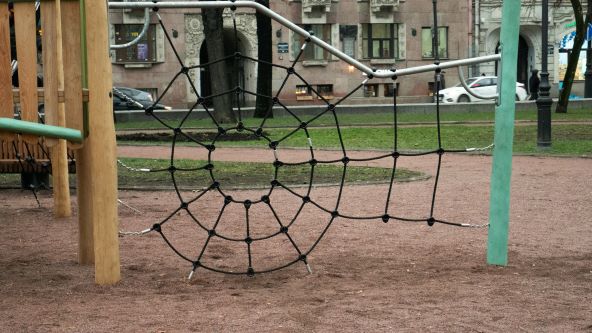 It was billed as a day of teambuilding, a day out of the office, a day of relying on each other’s ingenuity and problem solving to master a number of outdoor courses.

And it was all of that, at least until near the end. For one person of our team, it was also a day that could have brought painful humiliation.

We were randomly assigned to three teams of six individuals each. Most of us knew each other well, but there were some newbies in our ranks, and some of us had not worked together on a project. There was a mix of males and females, some athletic individuals, most not.

The team I was on did well with all the courses, until we got to the last one – the spider web challenge. The ropes were tied together such that there were openings of differing sizes. The various sized openings were allocated randomly throughout the spider web.

The goal of the challenge was to pass all six of us through the web from one side to the other without touching the rope. If the rope was touched, the point was lost. As each person reached the other side, he or she could assist with the next person being passed through the openings; but as each person reached the other side, there were fewer team members on the starting side to lift and pass team remaining members through. No opening could be used more than once.

There was some strategy involved. For example, the first person was passed through a lower opening so that he or she would not have too far to fall on the other side, while at the same time, the last person had to have a larger lower opening to dive through without assistance. A young woman on our team, approximately five feet tall and less than 100 pounds, would be the second to the last to be passed through. She could be lifted by the last person and passed to team members on the other side through a smaller opening near the top of the web.

Another young woman on our team was also five feet tall, but very much overweight. I knew her well and was aware that she was constantly battling her weight. She was self-conscious about her size under normal circumstances, but I now saw a look of sheer terror cross her face. Not only would her team members soon realize how heavy she was, but we would have to “handle” her to pass her through the largest hole in the center of the web.

One of our team members also recognized her deep discomfort. With sincere regard for her dignity, she offered that our team would forfeit the point and not require her to participate in this course challenge.

I could not have been prouder of my colleague. The young woman was already embarrassed, and her humiliation would have been much worse had the team insisted she be passed through. We lost the competition, but we learned a much greater lesson by rallying around our teammate.

Who said that Project Managers can’t have feelings?

However, I want to make another point here, specifically with regard to teambuilding for IT project teams.

In an earlier article (“How to Develop Project Team Members”), I made the following statement: “My one caution with teambuilding, however, is to ensure that the activities are tailored to an IT team – to this IT team with all its uniqueness – rather than depending on a cookie-cutter teambuilding approach typically offered by many generic training companies.”

That caution was not heeded in the incident I just described. Our Senior VP had hired a generic, experience-based, teambuilding and training company that never gave a thought to the types of challenges that would be most appropriate and effective for an IT team. No thought was given to tailoring exercises for our team and how they would help us when we returned to the office. The challenges were largely strategy based (admittedly fun for IT practitioners), but there was little other learning that was specific to the relational and teambuilding needs of our team.

So, from that perspective, the day was a bust – except for this one serendipitous bright spot when one of our colleagues had another colleague’s back, and showed us all the meaning of team.