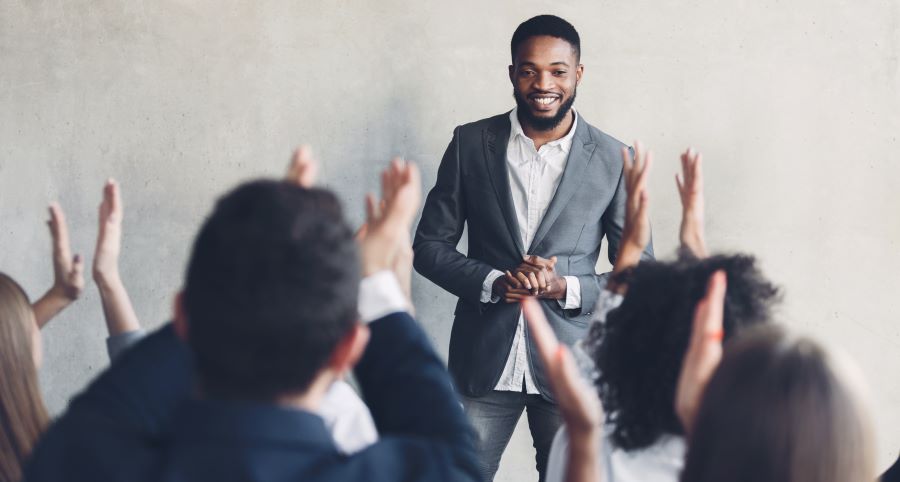 I still chuckle whenever this incident comes to mind.

A colleague of mine left the IT consulting firm where we both worked to join a company in a completely different industry. We lost touch over the years.

Kevin surprised me one day with a call. We exchanged pleasantries, and caught up. He was now married and had a young daughter. I, in the meantime, had moved on to another project and was still on airplanes every week.

“So, I’m calling because I need your help,” he suddenly blurted out.

“Well, I’ve been promoted to Vice President, and I need to give the keynote speech at our annual board meeting. I have no idea where to start. I know you’re a member of the National Speakers Association and speak a lot.”

We talked about the theme for the meeting, the message he wanted to convey, and the impression he wanted to leave as a newly minted VP. I asked him to craft his speech and send it to me for a review.

Which he did. It was a good speech, but needed a lot of work. I called him.

“Kevin, buddy, the content is great, but it reads like a magazine article. You need to make it more conversational. Fewer stats. More stories. You especially need a killer opening story to get your audience’s attention.”

He jumped at my suggestions and re-wrote the speech. He sent it back to me, but had a new request. “I need help in coming up with a really good story to open with.”

We brainstormed for awhile and got nowhere. Finally I told him that I would create a story that he could use as an example. All he needed to do was to come up with a heartwarming story to fit the pattern.

That evening I created the heroic story of Mrs. Johnson and how she had overcome a crisis in her life. I felt it was a good model for him to follow to develop a signature story that would inspire his audience and highlight his new role in the company.

Two weeks later Kevin gave the keynote speech. He called me the next day to thank me, ecstatic as he relived the moment. Several people had approached him after his speech to congratulate him on his promotion and to praise him for his inspirational speech. They would not soon forget Mrs. Johnson.

“No, I loved your story so much, I just used it as you wrote it.”

“But Kevin, that was fiction. Are you saying that you used a fictional story and made it sound like Mrs. Johnson was an actual customer of your company?”

“Yep. And it worked really well.”

I was dumbfounded (but admittedly delighted at the same time).

“You’re not gonna believe this.” he said, “I was at a corporate meeting and one of the staff came running up to me all excited. The first thing she asked was how Mrs. Johnson was doing!”

I still chuckle whenever this incident comes to mind.